The Wikipedia article Argument (linguistics) starts its discussion of the argument/adjunct distinction by asserting that an argument is what is demanded by a predicate to complete its meaning, while an adjunct is not so demanded.  For example, if someone asks me “What is Joe eating?” my answer would be drastically incomplete if I replied “eats.”  My answer would still be drastically incomplete if I supplied just one argument, ‘Joe’, to say ‘Joe eats.’  Only when I supply a second argument, say, ‘a fried egg’, would my reply not create a sense of a question ludicrously left hanging and an answer simply not given.  The predicate _eats_ demands two arguments, such as  ‘Joe’ and ‘a fried egg’ for my reply to make any sense.

( This example, of course, is my own; I am offering it (maybe tendentiously?) in order to make drawing certain conclusions more natural. )

‘[I]n the kitchen’, however, is an adjunct, since nothing would be left ludicrously left hanging in the air were I to leave that argument out of the proposition “Joe eats a fried egg in the kitchen.”  The predicate eats does not demand that argument.

This criterion — i.e., what is demanded by a predicate to complete its meaning … henceforth I will call this the ‘demands criterion’ — runs into trouble when one notices that sometimes eats demands two predicates, but sometimes demands just one.  One might say:  “Joe goes into the kitchen.  Joe eats.”  ( Imagine a novelist or short-story writer working in a certain style.)  Although one could just as well say “Joe goes into the kitchen.  Joe eats a fried egg”, the argument ‘a fried egg’ is not demanded in this particular piece of discourse.

So if one wants to maintain that the predicate eats takes two arguments, they would  have to abandon the ‘what is demanded by a predicate to complete its meaning’ criterion and find another criterion for what is to count as an argument and what is to count as an adjunct.  This a contributor (doubtlessly not the same person who put forward the ‘demands’ criterion) to the Wikipedia article cited above tries to do.

Two-place relation (demands what is eaten to complete the meaning):

Here the key is composite, comprising both PERSON_EATING and FOOD_ITEM_BEING_EATEN, since we would may want to answer the question “What is Cliff eating?’ with “Cliff eats a fried egg and Cliff eats a strip of bacon.”

One-place relation (does not demand what is eaten to complete the meaning):

Here the key is, of course, PERSON_EATING.

Sometimes what Joe eats is a ‘core element of the situation’, sometimes it is not.  In a possible world there exists a tribe for whom the amount of  energy pounded into the ground by John’s running is a core element of the situation runs, such that something is left ludicrously hanging in the air when one simply says ‘John runs’ and not (to invent a new syntactic marker, ‘tha’, which expresses ‘the energy absorbed by the ground when John runs”’, just as ‘to’ expresses ‘the place to which John ran’ ) ‘John runs tha 1,000 <<some unit of energy>>’.

SQL Table (what is eaten is an optional or “nullable value”):

Yes — there is a certain oddness, a certain ugliness, to having Cliff suffer from two “null values”.  Maybe there is something fishy about the SQL idea of a “null value”?  But the SQL table does convey the idea that an adjunct is an optional value, while an argument is required.  After conveying this idea, we can get rid of the SQL table with its dubious nulls and replace it with the two-place relation EATS whose PERSON_EATING attribute is a foreign key to the one-place relation.

Once can of course add other adjuncts by creating new relations.

This is the way of treating the argument/adjunct distinction that I prefer at the moment, possibly with no good argument for preferring this way to the alternative. The alternative that is at the back of my mind as I write this is something like the following:  there is only one predicate eats, which is a two-place relation.  Or rather, there is only one primary, non-derived predicate eats.  In those cases in which the what-is-eaten argument is optional (so we are giving up the demands criterion for what is to count as an argument), we are projecting on the relation EATS on the PERSON_EATING attribute, to generate propositions such as “Joe eats something.”

Here I envisage the demi-urge performing the needed projection by ignoring the FOOD_ITEM_EATEN attribute (perhaps even forgetting there is such an attribute in the relation), then, in order to avoid duplicates (we don’t want our demi-urge to be seeing double!), collapsing what had been two appearances of Cliff into just a single appearance.

The picture of relations above may be pretty (forget the picture of the SQL table — that is definitely not pretty…nothing connected to SQL ever is), but even prettier is  Channing Tatum aka Magic Mike, who is today’s homage to Plato’s SYMPOSIUM: 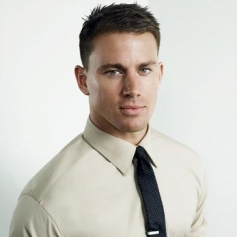 Notwithstanding all of my rapturous sighs at the moment, my sole interest in Magic Mike is, of course, as a stepping stone first, to the Relational Algebra, and then, ultimately, to the Platonic Form of Beauty.